The sage of a US ranger

I graduated from college in June of 1942 and went right into the army. I had two years of basic ROTC (Reserve Officer Training) in the horse cavalry my first two years in college. This was mandatory in what were landgrant collelges and universities at that time. I wasn't in the least interested in the military, and did not apply for advanced ROTC which led to one being commissioned when graduating.

I had basic training for 13 weeks in California in heavy weapons that is defined as water cooled .30caliber machine guns and 81 mm mortars. I was never much of an athlete, but I did win a billfold as the prize for being the highest scorer in the battalion in machine gun firing competition. I was shipped to North Carolina and was in the Cavalry Reconnaissance Troop of the 78th Division there. We trained for quite a few month. Then, Most of the men shipped out and we noncoms remained. I was now a section sergeant. It was obvious we would receive more new men and go through several more months of training with them.

Joining the US Rangers

One morning the 1st Sgt. at reville said for all the men who thought they would like to be Rangers to pick up their papers at the orderly room and go for their interviews. I had never heard of this before. They came back at noon and said they were promised, if selected, that they would have a few weeks training, go overseas (undoubtedly to England) and would be in on the big one! My buddy and I looked at each other, got up and went to the orderly room and got out papers. We interviewed, and were both selected. Why? It may sound silly in this day and age, but we felt that, if we were to be in the war, we would like to be involved in what would undoubtedly be the most noteworthy engagement of that war. If I was going to be there, I wanted to prove to myself that I was man enough to hold my own and do my job!

We went to Tennessee and became members of the 5th Ranger Infantry Bn., as the official name was. The 2nd Bn. had formed in this same camp just before we were brought there. I was the section sgt. of Co. E, with two squads of 5 men each in the section. We had light machine guns and 60mm mortars.

'Baseplate' was the name given me by the 1st Sgt. so I just kept it and have used it in writings. In the 80mm mortar, the most intelligent man is the squad leader with the sight. The next carries the operating mechanism. Next in line is the one who carries the tube. last is the one who carries the baseplate. He needn't know anything, just have a strong back! Now you know! We had 8 weeks of intensive training, firing everything. We even had a Boyce Antitank rifle from the Canadian army which fired .55caliber armor piercing bullets. We then went to Florida for 2 weeks on rubber boat training on the ocean. Then up to New Jersey and more training and then to England.

After a month in England, we went to Scotland on the Firth of Clyde in Tighnabrau or some such name! We were quartered in homes. Each day we went out (in March) in assault boats, rounded a point toward the ocean, came in and landed by wading in waist or shoulder deep water (cold!), then hiking about 5 miles over the hills and attacking. We didn't know at the time that this would be an assigned mission of needed.

Back to England at Leominster and then to the south coast. There, I had a most sore foot and went on sick call, learning that I had a fracture in a bone. I went to a hospital and almost missed the invasion got back just in time. 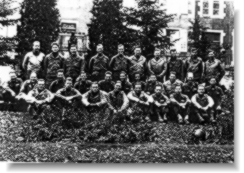 Our Bn. was on two British ships. We got our assignment after being placed in a camp with armed guards patrolling outside so what we learned couldn't be gotten out. The 2nd Bn. was to land on Pointe du Hoc at Hhour with 3 companies. (our line companies had 65 men) They had the specialized equipment to scale the cliffsducks with extension ladders which would raise up to the top, mortars to send up grappling hooks, etc. Our Bn. was to land one hour later, at H plus 1. If our commander got word that the 2nd had taken the pointe, we were to follow them in. If he didn't, we were to go 5 miles up Omaha Beach and land near Vierville sur mer. At that time, after one hour, the infantry landing there at Hhour would have a beachhead and the hill and the road at the top. We would go through the beachhead and hike the 5 miles back to the pointe and attack it from the rear. The 6 155mm guns there were the objective. These were the only ones which could shell out some 12 miles to the transport area. Our commander got word that they reached to pointe, but not that they had taken it. We therefore went to the Vierville area.

Unfortunately, when we got there, nothing to speak of was taken! Troops were on the sandy beach, but they weren't off it! It was still being straffed by machine guns. Rockets were coming in on it. Many wounded were on sand bars screaming for help, while the tide was coming in. Noone could help them. Tripods of large steel rails loomed everywhere along in the water, each supporting a mine. The hill rising high above the beach was obscurred with smoke.

Our assault boat got in some distance from the beach and the coxswain cried "all out, we're aground!"and dropped the ramp. The lieutanant jumped out and disappeared! We were far from being aground! One sgt. put his tommy gun in the coxswain's ribs and suggested we had better be gotten ashore! We hardly got our feet wet! As soon as we were out, they could get away and go to their mother ship, of course.

You notice little things. Our co. was in two assault boats, and the other was on our right. As I waited my turn to get out, I noteiced one of my ammunition carriers laden with mortar shells jump out and sink to his shoulders. He was very short! He couldn't move! Then, Sgt. Beccue dashed out into the water, grabbed him, and dragged him ashore.

Once ashore, we had orders to stay put while the officers gathered to see what we should do under these circumstances. We were laying on small rocks. I was next to Sgt. Spurlock, Co. clerk. I noticed that he was carefully reaching under him, pulling out a rock, then repeating this process over and over. He was, of course, slowly lowering himself so that there was less chance of being hit! Finally, word came that our mission had been changedA General of a Division there said to forget Pointe du hoc, we had to take a beachhead or all was lost! His order became the current slogan of the Rangers: Lead the Way, Rangers!

One of the squads put a bangalore (large pipe loaded to explode)under the several strand wire fence, blew it, and we went through that and the sea wall and up the hill. It was covered with 'achtung minen' signs, and some were true! Regardless, we got up the hill with very few casualties. I wasn't sure I believed what I saw when I saw my first dead German soldier. I couldn't tell if he was really dead or a waxen dummy!

We crossed the coast road at the top of the hill and then had a counter attack. Our Bn. Commander, Col. Schnieder, had gotten to just where my section was in a ditch. He was getting reports which weren't too good! The 2nd Bn. had one company which was to attack Pointe el raz de la percee (spelling) and two companies were to be supporting us. These two hadn't shown up. An artillery officer appeared and was to give us support. Col. Schnieder asked for fire on the source or our counterattack, but the Lt. said that was too close! He onlly had one gun ashore and it needed a more distant target. Col. settled for one of our mortars firing at the position.

We then moved through the town of Vierville, cleaning out snipers, then settled in by digging slit trenches as needed for the night. I slept well! I am rambling, but this may give you an idea of our day. It didn't cover the rough trip in from the ship where most of the G.I. used both of the puke bags each was issued for sea sickness! The flights of 4 at a time rockets going over us and landing on the beach. Lack of proper training kept many men on the beach while they would have lived had they had the courage or knowledge to attack as they should. Unforgettable sights such as looking down at the beach and seeing a whole Landing Ship Infantry with men streaming down the two gangplanks suddenly covered with a ball of flame when a shell hit a man carrying a flame thrower. Such are the chances of life, and death.

After the D-day campaign, our Bn. had lost about 25 men killed plus many wounded. We ren a German POW camp a few days running captured soldiers down to the beach (Utah Beach) where they were loaded onto ships. We got to Cherbourg very briefly, and were sent to Flamanville to guard against a raid from Germans still on some of the islands. Incidentally, we spent a very nice day there in the D-day celebration two years ago. We didn't liberate the town, but they asked if we in the 5th who had been there around the old Chateau would come and help them celebrate anyway. We did. They dedicated a plaque to Gen Leclerc, who led the free French troops into Paris that day. His son Charles gave the talk.

My last was the IrschZerf Campaign in late February. We were to go 3 miles behind the German lines and hold a road so they could not use it to bring up supplies to their front! That was an interesting experience! An armored division was to break through to us in 48 hours if we held the road. We did, and they didn't! After some 60 hours or more, I was captured in the middle of the night after finally getting so sleepy I had to wake the last man I had to take over the machine gun. I hadn't slept for days. When I awoke, he was dead and the gun captured. I and a few others were captured and so I spent the last two months of the war as a German prisoner. They brought some odd adventures also! Many I could have done without at the time, but interesting to look back on! I received a second purlpe heart the afternoon before I was captured.