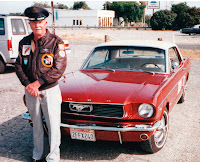 On the 4th of July Colonel John M. Carah parachutes into occupied France. His B-17 four-engine bomber had been shot down. I was the start of an eight-month wartime odyssey in Europe.

Lt. John M. Carah's B-17 .
"I am a helluva lucky man, basically," Carah says as he reflects on his World War II experiences. Carah, who left his native Chico in California USA to join the Army Air Force in 1942, was piloting a B-17 Flying Fortress in a daylight Independence Day raid near Le Mans when his bomber was damaged at 25,000 feet by 22 mm cannon fire from German Messerschmitt fighters.

But the initial damage wasn't a fatal blow to the four-engine bomber, Cara recalled. He thought he clould limp back to England by dropping to treetop level - away from anti-aircraft fire and enemy fighters - and heading west toward the English Channel.


"Dangling from his parachute about 1,000 feet above the ground, he remembers seeing an Me-109 flying directly toward him."

At 6,000 feet, a second attack by German fighters disabled the B-17 and Carah ordered his crew to bail out. "You didn't have time to think, it was automatic," Carah said of his leaping from the bottom hatch at the front of the bomber. "I got the hell scared out of me."

Dangling from his parachute about 1,000 feet above the ground, he remembers seeing an Me-109 flying directly toward him.

Lt. John M. Carah near the tail of his B17 after his first combat mission with target Antwerp, Belgium on 22 june 1943. A day later this same aircraft exploded on the base in England while it was being loaded with bombs killing 23 USAAF airmen. James B. Scott, a armes expert of the 533rd Sqn. 381st BG was there at the time, he says he saw men playing a game swinging a bomb in the lift while loading the aircraft. He says when he saw what was happening he ran away and the plane exploded while he was still running, throwing him on the ground. (source Then and now 147 (dutch edition)).
"Oh (expentive), this is it!" Carah remembers thinking. "I thought he was going to shoot, but he didn't. Maby he thought his prop wash was going to collapse my chute, I don't know."

He landed safely in an apple orchard, and minutes later was whisked away to a farmhouse by a group of civilians who, it turned out, were members of the French underground - and who initially thought he might be a German agent trying to infiltrate their organization, Carah said.

"They kept me in the bedroom of a house for two days. Hell yes they were suspicious. They weren't quite sure wheter I was a true American or a member of the Gestapo.

Guided by members of the French Resistance, he and several other Allied fliers made it 1˝ months later to neutral Switzerland. In the winter of 1944, restless to return home, Cara and nine other Allied flyers left the safety of Switzerland and headed across occupied France.


"Armed French Resistance fighters freed them a few hours later and they continued unmolested to Spain "
"I missed my wife," he said. But the trip almost ended in disaster when they were captured shortly after slipping across the border, he said.

Armed French Resistance fighters freed them a few hours later and they continued unmolested to Spain which like Switzerland remained neutral during World War II.

On March 2, 1944, Carah was in spain and on his way to the British navy base at Gibraltar. A few weeks later, he was at the Pentagon being debriefed by U.S. intelligence officials.

Crew from left to right: Lt. Paul Mc Commell (navigator), Lt. Olaf Ballinger (Pilot), George Williams (Bombardier), Lt. John M. Carah (Pilot).
There, he recalled dashing for a telephone to call his wife Connie, who was staying with relatives in Marysville. "This is John," he recalls saying. "John who?" she asked.

USAAF reunion - Connie Carah, Paul Mc Commelt, Marie Mc Commell, John M. Carah.
After the war, Cara served two more decades in the Air Force, retiring in 1966 and becoming a top executive with Norelco in San Francisco. After 10 years as a Norelco vice presitent, he started his own business, Sierra Copy Systems Inc., based in Oakland. He retired again six years ago when he and Connie, now 69, mobbed to El Dorado Hills.

Article written in 1993 by Steve Gibson for the Sacramento Bee.