The attack on Roermond 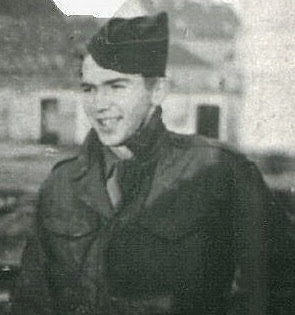 Around the 18th or 19th of February, we moved out to the Dutch town of Linne. We were there to relieve units on the British 7th Armored Division - one of Montgomery’s ‘Desert Rats’ units - and units of the British First Commando Brigade. Linne was just a few miles south of Roermond, Holland, which was to be the objective of the next allied attack.

Relieving the British Commandos was quite an experience. They had been in that location for about a month and had really dressed up their area. The unit that we relieved had dug foxholes in front of the town of Merum. They had covered them with sheet metal they had found someplace and piled a lot of earth on top of that. The foxhole I was in most of the time had been dug in the shape of a ‘ U’. It had been lined with straw and had an easy chair, which had, been taken from one of the nearby houses. It was the nicest, and most comfortable - and safest - foxhole I had during the entire war.

The British were being reorganized so they could join the offensive that was to start on Feb. 23, 1945. The Roer River had begun to subside after the Germans had blown up the dams a couple of weeks before. During that time there was not much that could be done as long as the river was up but that was about to change. As the river went down, the engineers got ready to build the bridges needed to get the armored units across.

The front lines were on the outskirts of Merum. We slept in the ruined houses on the outskirts of town and were in the foxholes usually during guard duty. The British had maintained contact with the Germans by firing artillery round at noon every day and the Germans did likewise. The Americans soon changed this by firing in all directions and at all times of day or night.

On February 26, 1945 we jumped off on a big attack to drive the Germans out of Roermond, Holland. The division had been involved in various small engagements since the middle of January but this was the first big action for my unit, the 58th AIB. The land in that part of Holland is as flat as it is in central Ohio. The attack began about 4:00 or 5:00 am so that we could move up under the cover of darkness. Our first objective was to cross a minefield and anti-tank ditch and capture a factory near Merum.

I was assigned to carry a section of Bangalore torpedo with me so we could blow an opening in the minefield, which was in front of the anti-tank ditch. Fortunately, my platoon sergeant, Bill McClain from Pittsburgh, Pa. found a path through the minefield used by the German patrols so I got rid of the damned torpedo. It was about 4 or 5 feet long and had ten to twenty pounds of TNT in it. I didn’t relish the thought of pushing this thing into a minefield. It is used to open a path through the field but if it hits a mine as you push it through you get a premature path and other dire things happen to you.

There was a lot of firing going while we were moving up and once while I was on the ground, a row of machine gun bullets ripped up along side of me. I still had the Bangalore torpedo and I wondered if it could be set off by gunfire but I didn’t think so. Bernard Demcovitz from New Brunswick, NJ was just ahead of me at this time. As I moved up to him I saw that he had been hit in the side. The bullet made a hole in his entrenching tool when it hit him. Bernie was the radio operator for the platoon and was our squad’s first casualty. We propped him up on the radio and made him as comfortable as we could and left him for the medics. I do not know why we didn’t realize that we needed the radio.

After we reached the anti-tank ditch we crossed it on some ladders that some of the other men had brought up. I don’t know why we crossed it since it would have been easier just to go down one side and up the other. Safer too. One of the men in my squad said that when I went over it looked like fireflies surrounded me because there were so many tracer rounds being fired. I was not aware of anything except getting to the other side as quick as possible and not falling off the ladder.

We crossed the anti-tank ditch and covered the land to the factory very fast. The only problem was that only about 40 of us made it to the factory. The rest were still pinned down on the other side of the minefield. Very shortly we realized that we were surrounded and cut off from the rest of the battalion. We got to the factory before dawn and I think that by finding the path through the minefield, we got there so quickly that even the Germans did not know that we were there for a while. That soon changed though.

Since we had lost the radio, we didn’t have a way to communicate with the rest of the battalion. The Germans knew where we were but the Americans didn’t. We spent the rest of the day being shelled and fired on intermittently by both sides. Norman Person from Indiana, another man in my squad, was hit in the leg by a piece of shrapnel, which came through the factory door facing the rear, and it broke his leg. Norman got a quick trip home the next day.

Later in the day I was crossing in front of the same door when a string of machine gun bullets laced the door above my head. In attempting to get down quickly I slipped in some liquid that had been spilled on the floor and went sprawling. The guys with me said that they thought that I had been hit for sure because of the way I had fallen down. I think the machine gun fire and the shell that wounded Norman came from the American lines because they were behind us and it would have been hard for the Germans to hit us from that direction. Friendly fire - or not so friendly - I guess you would call it.

Later in the day, I was on rear guard with Cpl. Mac McClain, no relation to Bill, and we saw three Germans coming up to the factory from the direction of our lines. We surprised and captured two of them but one of them us in time to dive behind a large pile of rocks and escaped. I think the stuff was some kind of raw material to be used in some kind of process by the factory. During the rest of the day, we occasionally saw Germans moving in our rear but they didn’t come too close.

After dark S/Sgt. Bill McClain and another man went back to get the radio. When they got there, they found that Pfc. Bernard Demcovitz had died during the day. The medics had not been able to get to Bernie because he was in an open field which was swept by gunfire most of the day. When they got back with the radio we made contact with the other units of battalion and at least they stopped shooting at us. We set up a perimeter in front of us for the night. (2/26/1995. Bernie was killed 50 years ago today. It is hard not to reflect on what the war cost him as I look back on what I have done during the last 50 years.)

We later learned that the 58th AIB, had 58 casualties on Feb. 26. That is almost 6 percent, which is pretty high for one day. Our squad had 2 casualties which is 20 percent of a ten man squad and that is even higher.

The next morning, we found that the Germans had pulled out in the middle of the night and our other units were able to relieve us. The way to Roermond was open. Unfortunately, our unit was pulled back take part in the attack to capture the Rhineland and maybe a Rhine bridge so we were relieved by the 15th Cavalry Group who I think got credit for taking Roermond. Shortly after the other units arrived, we put Norman Pierson on a medical jeep for evacuation and almost immediately moved out toward Germany.

I was assigned the job of radio operator after Bernie was killed.